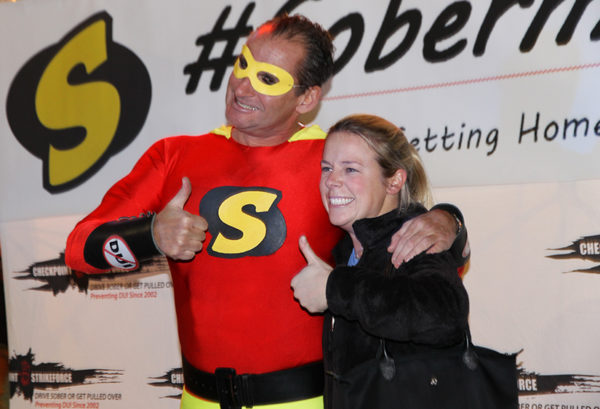 A new superhero will be hitting the streets and bars of Clarendon Saturday night.

“SoberWoman” is described as the “witty better half” of SoberMan (left), the anti-DUI superhero who tried to save Clarendon bargoers from poor post-drinking decision making last December.

“SoberWoman will engage with patrons at Arlington area restaurants and quiz them on how they plan to get home after partying,” according to a press release. “She will award prizes to those who have made advanced plans to get home safely by not drinking and driving. SoberWoman will pose for pictures and encourage bar-goers to share photos and her mission via social media, using hashtag #SoberWoman.”

SoberWoman is planning on stopping by Whitlow’s on Wilson (2854 Wilson Blvd), Clarendon Grill (1101 N. Highland Street) and Spider Kelly’s (3181 Wilson Blvd) between 10:00 p.m. and midnight on Saturday. She will be joined by Arlington County Police Department Captain Kamran Afzal and Kurt Erickson, president of the Washington Regional Alcohol Program.

The arrival of SoberWoman should attract some attention. She will “arrive in a police motorcade and use a P.A. system to announce her mission at the corner of Wilson Blvd and N. Filmore St., adjacent to Whitlow’s,” according to the press release. “She will repeat her police ‘sirens and lights’ arrival at the following bars before engaging bar-goers inside”

Organizers say SoberWoman’s superpowers — namely, “continued vigilance and heightened awareness about drinking and driving” — are needed because drunk driving fatalities have been on the rise in Virginia over the last two years.

END_OF_DOCUMENT_TOKEN_TO_BE_REPLACED

More Stories
TRAFFIC ALERT: Major Delays on I-395 Due to CrashLetter to the Editor: The Streetcar Is Dead, What Comes Next?