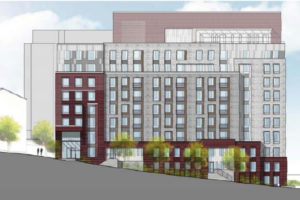 Some stakeholders along Columbia Pike are asking the Arlington County Board to name the area a “revitalization district” — a designation normally reserved for blighted and impoverished communities — in order to spur affordable housing development.

County Manager Barbara Donnellan has yet to issue a recommendation on the item, which the Board is set to discuss at its meeting this Saturday.

According to Virginia Code, an area can be deemed a revitalization district if:

Columbia Pike Revitalization Organization Executive Director Takis Karantonis said the Pike isn’t blighted, but he believes it may qualify for revitalization district standards because “when a community lacks the diversity of housing that would support certain types of economic development, then it still can qualify for Low Income Housing Tax Credit (LIHTC) points.”

Those points are crucial for affordable housing on the Pike, as LIHTC money funds “9 out of every 10 of America’s apartments for low-income families,” according to the Housing Advisory Group. In Virginia, those funds are distributed by the Virginia Housing Development Authority, which gives projects 30 points toward its total qualification score simply for being located in a revitalization district.

“In the past, these points weren’t really critical to obtain tax credits,” Karantonis told ARLnow.com. “Now they are critical. If you don’t have a project in a revitalization district, you can really forget about LIHTC support.”

Karantonis said the decision to apply for the district had “nothing to do with” the recent cancellation of the streetcar project.

It’s unclear if the County Board will have the same interpretation of Virginia Code as CPRO and the Pike’s affordable housing developers, but at least one project in the pipeline is relying on the designation.

The Arlington Partnership for Affordable Housing has submitted initial plans to build two eight-story residential buildings, containing a total of 229 apartments on S. Frederick Street, a block from Columbia Pike in the Columbia Forest neighborhood. The building, whose rendering is pictured above, would be built on what is currently the parking lot of the Columbia Grove apartments.

That application is in the early stages — it’s scheduled to be discussed by the Form-Based Code Advisory Working Group today — but Karantonis said it an projects like it on Columbia Pike need the revitalization district designation to continue receiving federal support for affordable housing.

“This is exactly the kind of density related to the future transportation system’s capacity,” Karantonis said. “In order to get this kind of density, you need the financial support to do that, and you have to weave it together. One of the important parts in the LIHTC subsidy, and for this we want to qualify.”