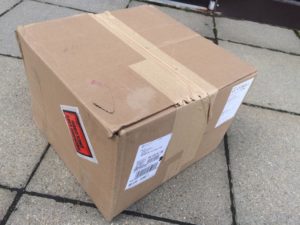 Arlington County Police are investigating a series of package thefts from homes around Ballston.

The thefts took place on Monday the 1100 blocks of N. Randolph Street and N. Vermont Street, and on the 4100 and 4400 blocks of Washington Blvd.

Police say as many as 10 packages sent to those addresses were found opened and tossed into nearby bushes. The perpetrator may have been spotted by a local resident, but was able to flee the scene.

“A witness told police he observed a subject walking around in a narrow walkway typically used by residents only,” according to a crime report. “The witness initiated contact with the subject who provided vague answers then left the area quickly. The subject is described as a black male, early 20’s, 6’01”, thin build, wearing a dark colored winter hat with a thin white line around the top, and carrying a large black or blue duffel bag.”

A man roughly fitting that description was spotted by a resident in Ballston this afternoon, running with an Amazon.com box. Police are on the scene, looking for the suspect.

“Our District Team is aware of these cases and will be working on notifying the community to be vigilant during the holidays for this type of criminal activity,” Malcolm said. “I have seen several stories in the media recently about ‘package thefts’ so these are not uncommon thefts during the holiday season.”

Malcolm noted that the call to police on Monday was placed too late, and asked residents to report suspicious activity when they see it.

“Unfortunately there was a substantial delay in reporting the suspicious person,” he said. “We would like to remind members of our community to report suspicious activity to the Emergency Communications Center, 703.558.2222, whenever they see something.”