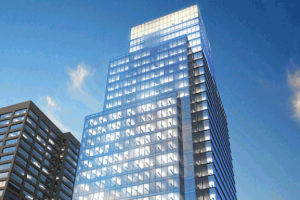 When CEB Tower opens — it’s expected to be finished after its adjacent residential tower in 2017 — its observation deck is expected to help usher in a new era for Rosslyn.

The tower, currently under construction at the corner of Wilson Blvd and N. Moore and Lynn Streets, will provide the public with a place to look down on D.C., the National Mall and Arlington National Cemetery from 390 feet up. The building will be one of the tallest in the region, and local officials think it will be the key for making Rosslyn a major tourist hub.

“We really believe that’s going to be a game changer,” said Rosslyn Business Improvement District President Mary-Claire Burick. “Moreso than other projects because it will really position Rosslyn as a tourist destination. This is something that we really think will be quite a draw into Rosslyn.”

The observation deck will pair with the U.S. Marine Corps War Memorial, five blocks down the road, for major tourist destinations that will create a “critical mass,” Burick said.

“Iwo Jima, the Netherlands Carrilon, Arlington Cemetery is a few blocks away,” she said. “All these things are right within this core area, and it’s so centrally located and accessible. We have a large cluster of hotels here with the Marriott, the Hyatt, Le Meridien … I think when you look at all that together, you’re now starting to see a critical mass of things happening in Rosslyn.”

The Iwo Jima memorial and Netherlands Carrilon drew a combined 1.4 million visitors in 2007, the most recently available data, according to Arlington Director of Convention and Visitor Service Emily Cassell. Arlington National Cemetery was the county’s most popular attraction, at 4 million visitors.

“Being able to see the nation’s capital from that perspective and having a 360-degree view would be really exceptional,” Cassell said.

Another potential tourist attraction down the road: a boathouse along the Potomac River. The National Park Service, which owns Arlington’s shoreline, said this summer that “the ball is rolling” on preliminary plans for the boathouse and Rosslyn boosters are salivating at yet another feature for the neighborhood. They’re also eyeing the potential for a gondola across the river to Georgetown.

“The gondola would represent the fun aspect of what Rosslyn is all about,” said Peter Greenwald, the Chairman of the Rosslyn BID and a senior advisor for Penzance, “with connectedness in new, fun and different ways that play into the creative class and the innovation that Rosslyn is becoming known for.”

The “critical mass” would likely benefit the future development planned for Rosslyn. Besides Central Place (the CEB Tower project), there’s the approved Rosslyn Gateway and Colony House project, plus plans for a Rosslyn Plaza redevelopment. In total, those could bring more than 800 new hotel rooms to Rosslyn in the not-too-distant future.

Despite its bright future, there still lingers the perception that Rosslyn is nothing more than a transit hub filled with office buildings. Burick’s charge since she was hired at the BID last fall is to change that perception.

“We want to market Rosslyn as a modern, premier destination,” Burick said. “I think when you come here on weekends and evenings, you’re already seeing that the streets do have life. I think the perception is already changing.”