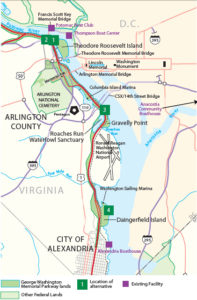 Efforts to bring a boathouse for non-motorized vehicles to Arlington have been on hold, but they’re ramping up again.

Arlington County has worked to bring a boathouse to the area since the 1990s. It has collaborated with the National Park Service on the project because Arlington’s shoreline technically is NPS property.

NPS launched an environmental impact statement (EIS) more than two years ago per direction from Congress, but had to put it on hold. Neither the county nor NPS would comment on why the EIS stalled. NPS and county staff revived the process when they met twice this spring to discuss moving forward. NPS now is in the process of finding a contractor to complete the EIS. According to NPS Superintendent Alex Romero, the goal is to partner with the contractor who previously began the EIS.

“There’s work that’s already been done,” said Romero. “We’re purposely identifying the same contractor that worked on it in the past to pick up where they left off. There may be some tweaks to the existing document, but we don’t want to revisit the whole thing.”

The county acquired some land in May on which the boathouse could be built if the Key Bridge area is chosen as the boathouse location. The County Board approved the purchase of 1101 Lee Hwy in Rosslyn for $2.4 million. However, the exact site for a boathouse hasn’t been chosen and won’t be until the completion of the EIS. So if an area other than Rosslyn is picked, the land purchased in May could be used for other recreational uses, according to Arlington County Park Development Division Chief Lisa Grandle.

Rep. Jim Moran, who is touted as being instrumental in securing funding for the EIS, believes the land purchase is a step in the right direction.

“Arlington’s decision to acquire land at Rosslyn Circle for a potential joint initiative with the National Park Service is encouraging and moves us closer to bringing the dream of an Arlington boathouse to reality.” Moran said.

The hope is that a contractor will be chosen soon and can begin to work on the EIS this year. Once a contract is awarded, NPS will have a better idea of long-term timelines for steps like public involvement, final plan approval and finding a company to build a boathouse.

“Until then, everything is preliminary, but the ball is rolling,” said Romero. “We are looking forward to moving ahead with the study and developing alternatives, and seeing what the alternative is so it blends into the landscape along the George Washington Memorial Parkway.”