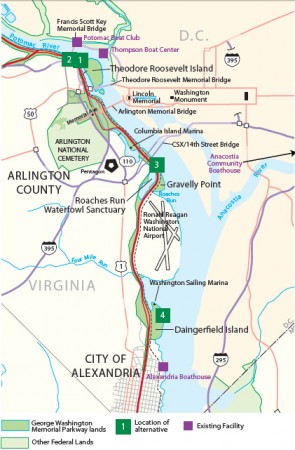 As part of an ongoing environmental impact statement (EIS), the National Park Service is now accepting public input on a proposed boathouse along the Arlington shoreline.

Because all of Arlington’s land along the Potomac River is actually NPS property, the EIS is mandatory by law. It formally began earlier this year, and assesses the impact a boathouse for non-motorized crafts would have on the natural and cultural resources in the area.

During the public comment portion, which began this week, residents are asked to examine the options in the proposal and voice suggestions or concerns.

There are four possible sites included in the proposal. Two options involve building the boathouse near the Key Bridge in Rosslyn, and another looks at a space near Gravelly Point. One alternative examines Daingerfield Island, which is in Alexandria. The final option is to take no action, meaning no boathouse would be constructed.

The proposal includes a facility with indoor space for storing equipment, training areas and floating docks. The plan has been in the works for years to ease the burden on boathouses in Alexandria and Washington, D.C., all of which are said to be operating at capacity.

A public scoping meeting will take place on Tuesday, July 24, at Washington-Lee High School (1301 N. Stafford Street). From 6:30-8:30 p.m., NPS employees will be present to answer questions and to accept written comments.

The various proposals can be viewed online and feedback can be submitted there as well. The public comment period ends on Friday, August 31. If all goes according to plan, the EIS will continue through winter of 2013.