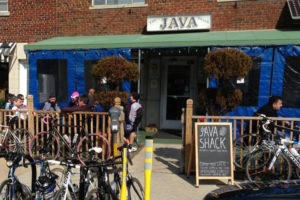 (Updated at 2:35 p.m.) Java Shack, the locally owned coffee shop in Courthouse, will change ownership on Thursday after opening 19 years ago.

The shop, at 2507 N. Franklin Road, is being acquired by Commonwealth Joe, owner Dale Roberts announced on Facebook yesterday.

Commonwealth Joe is an Arlington-based coffee company that sells its roasted beans, coffee-infused desserts and other goods both online and at local farmers markets. It was started two years ago by four Arlington residents and has grown around the community.

Commonwealth Joe’s owners “are passionate about coffee, and dedicated to maintaining and building upon our neighborhood tradition,” Roberts wrote in his Facebook post. “I’ll still be around, but will be less visible on a day-to-day basis.”

Roberts is hosting a going away party of sorts at “The Shack” tomorrow (Dec. 31), when Roberts will be “solo behind the bar” serving coffee in his last day as owner.