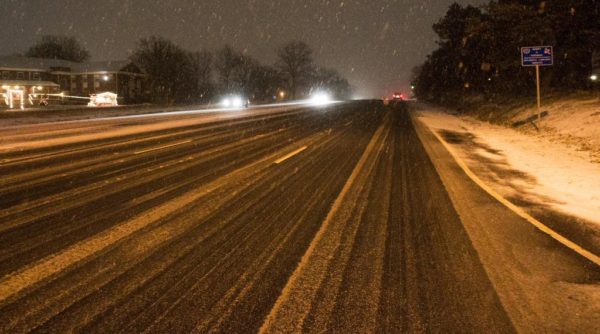 (Updated at 7:30 a.m.) Roads are covered with white, powdery snow as Arlington and the rest of the D.C. region gets its first snow of the year and first measurable snow of the season.

Several accidents have been reported around Arlington as an inch or so of snow has made driving treacherous. The crashes are happening throughout the county — on I-395, Glebe Road at Route 50, Wilson Blvd and elsewhere.

Cars and buses are struggling to make it up hills, particularly on neighborhood streets. Police have asked a salt truck to expedite to 16th Street N. near Virginia Hospital Center, as hospital employees and other drivers are having trouble making it up a hill.

Arlington snow crews “are out treating primary and secondary roads through the morning snow,” according to the Dept. of Environmental Services.

ART buses are running this morning, but delays are likely.

“Roads and sidewalks have become very slippery,” ART said in an alert. “ART routes are running but delays are expected.”

Students, meanwhile, will be disappointed to know that Arlington Public Schools has not seen fit to delay school as a result of the snow. The school system announced this morning that it’s opening on time, on a normal schedule.

School are opening on time in the District of Columbia and Fairfax County, as well.

On Tuesday, January 6, 2015, Arlington Public Schools is operating on a normal schedule and opening on time.

VDOT has reported 21 crashes in Northern Virginia as of 6:55 a.m.