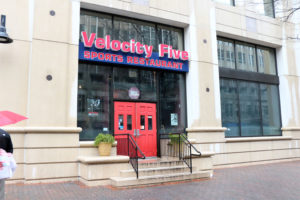 Velocity 5, the sports bar mainstay in Courthouse, is getting a makeover this spring into what its owners call “an American beer garden.”

The restaurant will close down for a month before re-opening as “Courthaus Social,” a beer garden with an expanded patio outside the location at 2300 Clarendon Blvd. The plan to close Velocity 5 and reopen as a beer garden has been around for nearly two years after new owners bought the location of the regional chain, which opened in Courthouse in 2009.

“We were trying to find the perfect concept,” one of the co-owners, Nema Sayadian, told ARLnow.com today. “You realize you have to find your own identity, and that’s what we were struggling with.”

Sayadian and Fito Garcia, also a co-owner, originally had planned to rename the restaurant “Social Haus” and turn it into a Bavarian-style biergarten, serving almost exclusively German beer and food. Courthaus Social, while still configured as a beer garden with “social seating” — long benches inside and out — will focus more on local craft beers from breweries like Starr Hill, Port City and Mad Fox.

There will still be some German beers on the menu and Sayadian says “we’ll still have the biggest schnitzel in town.” The concept will now be more food-centric, with locally sourced meats and sustainable practices Garcia hopes will serve as a model for other local restaurants. At its heart, Courthaus Social hopes to be a relaxed, community business.

“We’re not going to be pretentious about it,” Sayadian said. Garcia added, “Arlington needs beer places. And with Summers closing down, we want to help the area.”

When it opens, the bar will have about 1,000 square feet of patio seating fronting Claredon Blvd, adding to its patio facing Courthouse Plaza’s Wells Fargo Bank. There will be more than 30 beers on tap, and they will still be available in two-liter “boots” as well as steins.

Velocity 5 has served as a registration spot for bar crawls in Clarendon and Courthouse in years past, and while Garcia and Sayadian say they’re not against participating in more bar crawls, the attitude of the restaurant is shifting.

“We love the business that comes with the bar crawls,” Garcia said, “but we want to have a different focus and build a community around us. If Arlington is for the bar crawls, we’re down, but we’re not going to take part in something that’s frowned upon.”