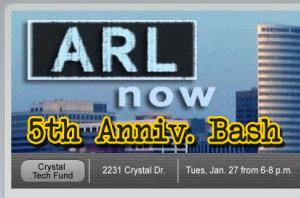 Believe it or not, ARLnow.com is turning five years old.

Launched on a Friday, on the eve of a snowy Saturday and a week before Snowmageddon, ARLnow.com has been published continuously ever since. During that time it has gone from being an informal local news blog based out of a Crystal City apartment to a professional news publication with full-time employees and an actual office.

To celebrate our big day, we’re inviting everybody to our anniversary bash. Our friends at the Crystal City Business Improvement District are helping to organize the event, which is being held from 6:00 to 8:00 p.m. on Tuesday, Jan. 27 at Disruption Corporation’s headquarters (2231 Crystal Drive) in Crystal City.

The party will feature drinks and delicious appetizers, all included in the price of admission. Tickets are $20.10, but act fast because for “early adopters” they’re just $12.90 through tomorrow night.