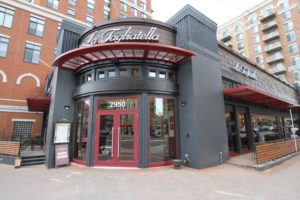 La Tagliatella, the Italian restaurant in Clarendon perhaps best known for a scathing Washington Post review, could close at the end of the month.

We’re told by one restaurant employee that Jan. 31 will be its last day. A manager, when contacted by ARLnow.com, said “there’s been talk of it” but “we haven’t gotten any official word yet.”

The restaurant, owned by Polish company AmRest, was the third American location of a franchise that was popular in Europe, and was viewed as a harbinger for potentially hundreds of additional U.S. locations. In May, the Washington Business Journal reported those expansion plans were on hold, and theorized the Post’s review — which called La Tagliatella “a threat to our nation” and compared it unfavorably to Olive Garden — might have had something to do with it.

La Tagliatella had a planned location in the Village at Shirlington at the former Extra Virgin space, and still has signs up that say “coming soon,” but the manager we spoke to said those plans have since been scuttled.

The restaurant opened in Clarendon in the prime spot at the corner of Clarendon Blvd and N. Garfield Street, formerly home to Restaurant 3, in 2013.