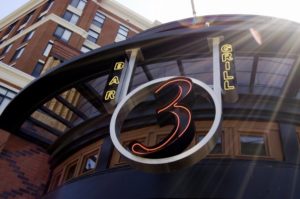 The Clarendon restaurant has announced that it will close its doors for good after last call tonight. Co-owner Jonathan Williams says he and fellow co-owner Greg Cahill, who also owns nearby Whitlow’s on Wilson (2854 Wilson Boulevard), have decided to sell the 221-seat restaurant.

“It has been a fun and exciting ride,” Williams said of the restaurant’s four and a half years in business. “I’m very appreciative for the neighborhood support. I’m proud of my staff and proud of what we’ve built.”

Restaurant 3 opened in October 2007 and served what was described as “classic American cuisine accented with innovative, regional twists.” Rebranded as “3 Bar and Grill” in 2010, the restaurant became notable for its pig roasts and annual Bacon Week, which earned it airtime on Sunday Night Football and the Travel Channel.

Williams declined to discuss the decision to sell the restaurant, but admitted that Clarendon has become an increasingly competitive market for restaurants. Just two weeks ago Market Tavern, another large restaurant along Clarendon Boulevard, closed amid bankruptcy proceedings.

“I think everybody’s aware of how competitive this neighborhood is,” Williams said.

Williams confirmed that another restaurant will eventually take 3’s place, but would not reveal the identity of the new restaurant or its owners. He also emphasized that nothing will change at Whitlow’s, where he used to serve as general manager before opening Restaurant 3 with Cahill.

“The [Whitlow’s] rooftop has been successful and we’ll continue to operate over there,” he said.

Williams was vague about future plans, but said that he hopes to do something bacon-related again. For the time being, he’s focused on finding new jobs for the restaurant’s 35-40 employees. Anyone interested in hiring his restaurant employees, he said, should email [email protected]