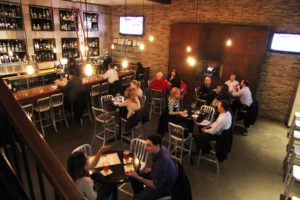 The steak-centric restaurant opened last year over Thanksgiving weekend, following extensive renovations to the former Harry’s Tap Room. The revamped restaurant featured a bar and lounge area downstairs and a dining area called the “Chophouse” upstairs. Overall seating was reduced during renovations — from 275 to 155 — and pricing was raised in conjunction with the eatery’s more upscale vibe.

Market Tavern’s menu included steaks, burgers, flatbreads, and other entrees, in addition to 26 beers on tap, 70 wines by the glass, and a selection of hand-crafted cocktails. There was also a self-serve “bread bar” upstairs.

Owner and restaurant industry veteran Michael Sternberg acknowledged that the pricey renovations left him with little financial wiggle room once business did not meet initial expectations, but he says he’s still not sure why Market Tavern never quite caught on with diners.

“I’ve been doing this for a long time and I thought this was a terrific restaurant,” Sternberg said. “I liked the service, I liked the food, I liked the decor, and I don’t know why we didn’t catch on in this neighborhood. I spend my nights awake just wondering about it.”

Reviews of Market Tavern were mixed, at best. The Washington Post’s Tim Carman said he’d go to the nearby Ray’s the Steaks over Market Tavern “nine times out of 10,” and Yelp reviewers gave the restaurant 2.5 out of 5 stars.

Market Tavern served its final customers last night after Sternberg reached an agreement to sell the restaurant last Friday, May 11. The restaurant is expected to remain closed for several months while the new owners obtain permits and make changes to the space for a new restaurant concept.

Sternberg declined to identify the new owners, except to describe them as “local, well-established restaurateurs.”

Market Tavern has been in bankruptcy since February. A bankruptcy court must approve the sale before the restaurant can officially change hands, Sternberg said.