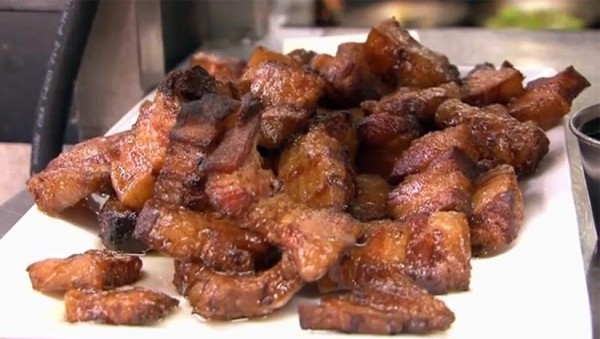 From Thursday to Saturday, Oct. 22, the Clarendon restaurant will be devoting an entire menu to its in-house cured and smoked bacon. Among the items on the menu:

The bacon festivities will kick off tomorrow at 5:00 p.m. with a pig roast and $5 pork sandwiches. Each night of bacon week will feature a bacon happy hour from 4:00 to 7:00 p.m., complete with bacon specials. Sunday’s brunch will feature a Bacon Benedict and the “Graceland Waffle” — a bacon waffle topped with caramelized bananas and a caramel/peanut sauce.

“We love bacon here at 3, and decided 3 years ago that we wanted to make a week-long celebration of bacon and dedicate an entire menu to it,” the restaurant said on its web site. “We have been curing and smoking fresh pork bellies since we opened and are really proud of the bacon we make. We worked hard on this year’s menu to make sure that every item was full of bacon flavor. We hope that you enjoy it and have as much fun as we have had creating it.”

Three’s Week ‘O’ Bacon is popular among locals, but it has even gained nationwide notoriety thanks to a Travel Channel segment filmed at the restaurant last year.