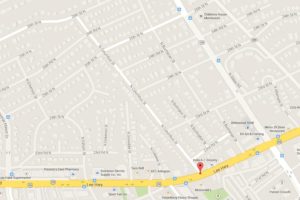 The reports have been making their way around neighborhood listservs, the popular Mothers of North Arlington listserv, local pet-related mailing lists and social media. Numerous emails have been forwarded to ARLnow.com.

According to various reports, at least two dogs have gotten sick since Sunday after eating “raw sausages” stuffed with pills, which had been left along sidewalks in the area around N. Columbus Street, north of Lee Highway. It’s not known what exactly was in the sausages, nor who’s leaving them on the ground.

The Animal Welfare League of Arlington has investigated the reports and recovered one such sausage, according to spokeswoman Kerry McKeel. That sausage is being sent for toxicology testing, which might take a couple of days. The 2200-2600 block of N. Columbus Street was the focal point of AWLA’s investigation.

McKeel could not confirm reports of one of the sick dogs being in “critical condition.”

“We talked to all the vet emergency rooms and we only have two confirmed cases,” she said. One dog was “released today and is doing fine.” No word yet on the other.

Dog owners should be extra vigilant about what their dogs might try to ingest while out on walks, according to AWLA.

“At this point we’re telling people to be cautious when walking their dog and to be cognizant of anything they’re eating,” said McKeel. “It’s unclear if this is a case of intentional poisoning or something else.”

Reached via phone this afternoon, a police spokesman referred reporters to AWLA.

McKeel said the last known incident of intentional dog poisonings in Arlington was about 10 years ago, when someone put tainted dog treats in a dog park.