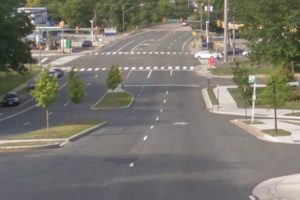 A teenage girl has suffered serious injuries in a bike accident on a steep downhill portion of S. Walter Reed Drive.

Police believe the girl ran into the back of a stopped SUV near the intersection of Walter Reed and S. Randolph Street, at the bottom of a steep hill. The girl suffered a serious head and facial injuries and was rushed to the trauma center at Inova Fairfax Hospital.

The girl was reportedly wearing a helmet. The driver of the SUV remained on scene, according to Arlington County Police spokesman Dustin Sternbeck.

The accident happened around 3:30 p.m. As of 4:45 p.m., investigators were still taking photos and measurements at the scene.