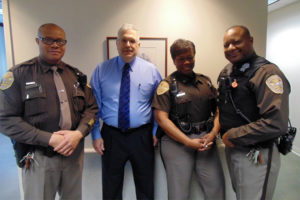 The victim was testifying at the trial of an alleged trespasser when he started “gasping for air,” his friend George told ARLnow.com. George, who declined to give his last name or his friend’s name, alerted Judge Thomas J. Kelley Jr., who cleared out the courtroom and came down from the bench to render aid.

When it became apparent that the victim was having a heart attack, Kelley laid him on the floor and started performing chest compressions, George said. Sheriff’s deputies Edwin Hill and Phyllis Henderson assisted Kelley and performed mouth-to-mouth, according to Sheriff’s Office spokeswoman Maj. Susie Doyel.

“It was a flash, [Kelley] was down off that bench in a hurry,” George said. “When I got to the hospital, the EMTs stabilized him and said whoever performed CPR on him probably saved his life.”

George and the heart attack victim are childhood friends and Arlington natives, and the victim’s house was allegedly broken into recently, which is why they were in court.

Between the time Kelley began administering CPR and paramedics arrived, George said the victim began breathing and regained his pulse — but then his heart stopped again, prompting the hero judge and deputies to begin CPR again.

“The judge had control of everything. He didn’t blink,” George said. Later Thursday afternoon, after ensuring his friend was in stable condition, George went back to the court house to thank Kelley. “He was telling me he had [performed CPR] years back and he was glad he still had the skill set.”