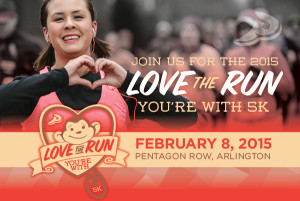 The annual Valentine’s Day-themed 5K in Pentagon City, “Love the Run You’re With,” will return Sunday, six days before the holiday.

The race will start and end on S. Joyce Street at Pentagon Row, and take runners down Army Navy Drive just past 28th Street S. The race also doubles as a matchmaking affair, with bib numbers corresponding to racers’ relationship status.

The course is the same as last year’s race, so the Arlington County Police Department will likely shut down the following roads form 7:00 to 11:00 a.m. for the race, which starts at 9:00 a.m.

Street parking in the area will be restricted, so motorists should be careful if they plan on parking on Saturday night.

Registration for the race is $40 and includes a commemorative blanket. After the race, runners are invited to Champps at 1201 S. Joyce Street for drinks, a free photo booth and karaoke. All runners — those registered as single (“Cupid Stupid”), it’s complicated (“Love ’em or Leave ’em”) or in a relationship (Co-dependent) — are invited to the bar after the race for mingling.