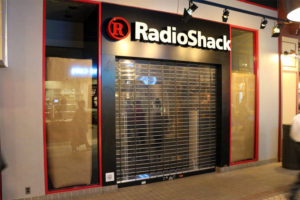 The company filed for Chapter 11 bankruptcy last week, and plans to close thousands of its locations by March 31, including the storefront in the Pentagon City Mall. Employees at the Pentagon City RadioShack could not say when that location would be closing, only that it was relatively imminent.

The RadioShack on the second floor of Ballston Common Mall is expected to be the last remaining location of the national electronics retailer in Arlington by the spring.

That Ballston store will likely be part of the newly formed consortium between Standard General, a private equity fund, and Sprint, the cell phone provider, keeping between 1,500 and 2,400 stores open nationwide, according to Forbes. Whenever the deal is finalized and the transition occurs, the leftover stores will be selling a mix of Sprint products and the electronic goods like cords and adapters for which RadioShack has become known.