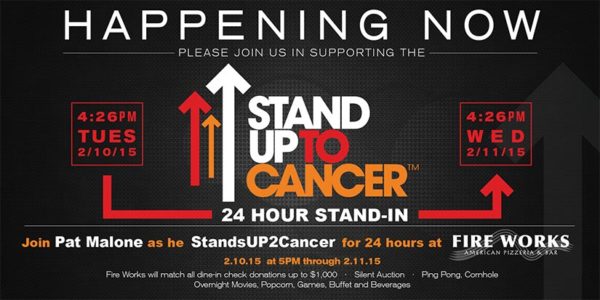 Fire Works Pizza in Courthouse (2350 Clarendon Blvd) will be staying open all night tonight as part of a military veteran’s 24 hour cancer fundraiser.

The Stand Up To Cancer 24 Hour Stand-In event will kick off at 4:26 p.m. and will run through Wednesday afternoon. It will feature late night movies, bar bites buffet, popcorn, ping pong, pizza, cornhole and other fun activities for the wee hours.

There will also be a silent auction featuring VIP Caps tickets, signed hockey sticks and more.

(Alcohol will be served until 2:00 a.m. and pizza until 3:00 a.m. A complimentary movie bar bites buffet will be provided but there will not be full restaurant service overnight.)

The event is being hosted by Pat Malone, a retired Air Force veteran, and timed to coincide with the first anniversary of Pat’s successful, seven hour operation to remove a malignant tumor at Walter Reed National Military Medical Center in Bethesda.

After months of radiation, rehabilitation and physical therapy, Malone is currently cancer-free with the strong desire to both raise money for cancer research and to honor and highlight the dedicated work of his military and civilian medical team at the John P. Murtha Cancer Center at Walter Reed.

Pat is hoping to raise $5,000 during the fundraiser. Fire Works is offering to match up worth of $1,000 of donations from dine-in guests. All donations will benefit Stand Up To Cancer’s collaborative cancer research programs.

More information is available at the fundraiser’s Facebook page and Stand Up To Cancer page. The event is being co-sponsored by Sysco Foods and Hardywood Park Craft Brewery.

The preceding was a promoted post sponsored by Fire Works Pizza.