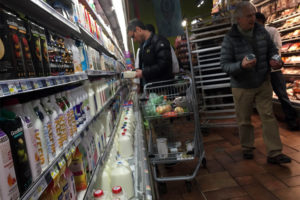 With forecasters calling for up to 8 inches of snow on Thursday, Arlington residents are hunkering down for yet another snow day.

Part of the ritual preparation for many includes heading to the grocery store to stock up on food and supplies, in particular milk, eggs, bottled water and bread.

“It’s going to be a freaking zoo in here,” an employee of Clarendon’s Trader Joe’s said, declining to give her name because company policy doesn’t allow staff members to speak to the media.

This afternoon, shelves were fully stocked at many of the grocery stores in the area, but that won’t be the case for long. Katie Butris was shopping at Trader Joe’s and used to work there. She said “crazy lines” are the norm before a storm.

“You can’t keep the shelves stocked,” she said. “Everyone gets here at once. And then the delivery trucks can’t get here so we were out of [many items] for days.”

Carolyn Marsh was shopping before taking off for a ski trip — benefiting from the snow many of her neighbors are dreading it — and said she was glad she could get the trip out of the way before everyone else was out of work.

“It’s awful,”she said. “The places look like they’ve been ravaged.”

A native of New York, Marsh said she never worries about loading up on milk and bread. She lives in Westover and can walk to get her food if need be.

“Washington sort of feeds on itself in these situations,” she said. “People see the big news stories and figure they should load up when everyone’s out and about a day later anyway.”

(Shortly thereafter, an ARLnow.com reporter was told by Trader Joe’s management to leave the store.)

Arlington and the D.C. area is under a Winter Storm Warning from midnight tonight until 9:00 p.m. Thursday, with the heaviest snow predicted from late morning to early afternoon.