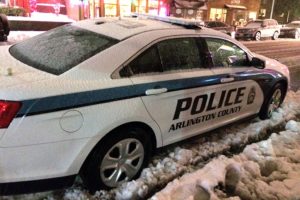 Police had to break up a fight outside Carpool (4000 N. Fairfax Drive) over the weekend after some snowball throwing turned violent.

Police say two men in their mid-20s were chucking snowballs near the entrance to the Ballston bar early Sunday morning when a couple approached.

The male half of the couple asked twice that the men stop throwing the snowballs so he and his girlfriend could safely enter the establishment.

“[Expletive] your girlfriend, and [expletive] you,” was the reply, according to Arlington County Police spokesman Dustin Sternbeck.

At that point, one of the suspects threw a snowball that pegged the woman in the back. The boyfriend, 30, and the snowball tosser then came face-to-face, police say, at which point the suspect “threw a haymaker” at the boyfriend. The boyfriend responded by dodging the punch, then landing a punch of his own, breaking the suspect’s nose, Sternbeck said.

The suspect’s acquaintance, who moments earlier tried and failed to break up the fight, then allegedly stepped in and attempted another wild punch. The boyfriend dodged that punch, as well, then “body slamed suspect No. 2 to the ground,” according to Sternbeck.

Neither suspect required an ambulance ride to the hospital, Sternbeck said. All parties involved declined to prosecute and were subsequently released without any charges being filed.