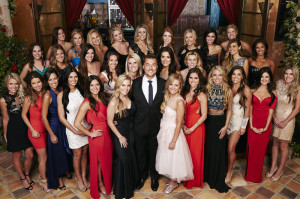 Jillian Anderson was eliminated early on this season, and infamously slipped on a rug and nearly fell when she thought this season’s bachelor, Chris, called her name during the rose ceremony. Instead, he picked her competitor, Julia, and 25-year-old Anderson returned to her home in Arlington. Tonight, she will be at Bracket Room in Clarendon (1210 N. Garfield Street) to watch Chris hand out his final rose.

Bracket Room is owned by a former contestant of The Bachelorette, Chris Bukowski, and has hosted viewing parties for the reality show’s season finales since it opened in 2013. Happy hour begins at 4:00 p.m. and the show starts at 8:00 p.m. Bracket Room’s Facebook page says there will be specials on wine and dessert.

At the same time, at Guarapo Lounge in Courthouse, radio hosts Sarah Fraser — another Arlington resident — is hosting a watch party of her own. Starting at 7:00 p.m., Anderson is expected to stop by for another appearance. There will be $1 tacos plus wine and cocktail specials and the chance to win prizes.

It’s unclear at which restaurant Anderson will watch Chris give out the final rose to one of the two finalists, Whitney and Becca.