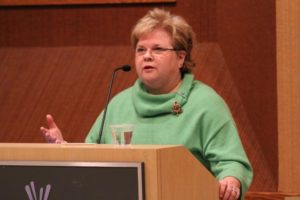 In an email to county employees (below), Donnellan — the top executive in county government — said she would step down June 30.

Donnellan was first named county manager in 2010, after beginning her career in Arlington County government as a budget analyst in 1983. She was the Arlington’s first permanent female county manager.

Schwartz, a 30-year Arlington resident, has served in county government since 2005. He was the county’s Chief Financial Officer before being named Deputy County Manager.

Donnellan’s resignation, while somewhat unexpected, comes at a time when some local leaders have been privately questioning the county government’s ability to effectively execute large-scale projects. Such grumbles were exacerbated by the cancellation of the county’s delayed and increasingly expensive streetcar project.

In a press release (below, after the jump), County Board Chair Mary Hynes praised Donnellan’s leadership.

“Barbara has been the consummate professional County Manager,” Hynes said. “She has kept her eye on the needs of Arlingtonians — residents and businesses — and given her heart, her intellect, and her passion to serving this community for more than 30 years. All five County Board members are tremendously grateful to her.”

It has been my honor and pleasure to serve Arlington County since 1983. From my various seats – including budget analyst, finance director, director of libraries, County Manager – I have had the privilege of being part of, and helping to build, our community. And we have a lot to be proud of.

I have served Arlington County with great pride for more than three decades. While I feel in my heart that I could lead this organization for many more years, it is the right time for me to retire and start a new chapter in my life. My last day will be June 30, 2015.

Any success that I have had throughout my Arlington career has only been possible thanks to you. You are energetic, thoughtful, smart professionals who dedicate yourselves to helping to build our community. My gratitude to you is boundless.

The County Board has named Mark Schwartz as Acting Manager; he will do a great job and I know you all will support him as you have supported me.

We have an excellent leadership team in place and I have every confidence that I will leave Arlington in great hands. I will honestly miss the laughter and joy that we all shared each day, while accomplishing much for the community. Thank you, thank you, thank you, for all that you do for our community.

I’ll be on the job for another couple of months and I hope to see you around the County. I have built deep connections in Arlington over many, many years, and I will undoubtedly be seeing you around Arlington in the years to come. I hope our paths cross again, and often.

After the jump, Arlington County’s press release about Donnellan’s resignation.

Arlington County Manager Barbara M. Donnellan today announced that, after serving the Arlington community for nearly 32 years, she is retiring.

“It has been my honor and pleasure to serve Arlington County,” said Donnellan. “While I feel in my heart that I could lead this organization for many more years, it is the right time for me to retire and start a new chapter in my life. We have an excellent leadership team in place and I have every confidence that I will leave Arlington in great hands.”

In October, 2010, the County Board named Ms. Donnellan County Manager. Under Ms. Donnellan’s leadership, Arlington County has successfully implemented nationally-recognized Smart Growth planning policies and continued the sound financial policies that have earned the County its triple-triple-A bond rating for many years.

She has worked on several key public/private partnership projects for the County, including: Ballston Garage; E-Trade; Shirlington redevelopment; Gates of Arlington; US Airways; Washington Capitals; and Rosslyn BID development.

“Barbara has been the consummate professional County Manager,” said Mary Hynes, chair of the Arlington County Board. “She has kept her eye on the needs of Arlingtonians — residents and businesses — and given her heart, her intellect, and her passion to serving this community for more than 30 years. All five County Board members are tremendously grateful to her.”

The County Board plans to name Deputy County Manager Mark Schwartz as Acting County Manager and will embark on a national recruitment for a new Manager. The search will be coordinated by Board Members Jay Fisette and Libby Garvey. “We are confident that Mark will do a great job and provide strong leadership continuity for Arlington,” said Chair Hynes.

Ms. Donnellan is a leader in the Metropolitan Washington Council of Governments (COG), which brings together area leaders to address major regional issues in the Washington Metropolitan Region. She currently serves as chair of COG’s Chief Administrative Officers Homeland Security Executive Committee. In Oct. 2014, she received COG’s 2014 Visionary Leadership Award, a prize that recognizes top government officials for their outstanding contributions to metropolitan Washington and their home jurisdictions.

Three governors have appointed Ms. Donnellan to the Board of Directors of the Virginia Resources Authority (VRA) and she is a current Board Member.

In 2009, Leadership Greater Washington presented Ms. Donnellan its highest honor –the Fannie Mae Volunteer of the Year Award, honoring her for her role in expanding the Youth Leadership Greater Washington program through enhanced planning, fundraising, and recruiting. She also has served as a volunteer for Arlington County Meals on Wheels and for other community boards.