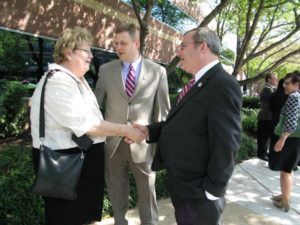 Donnellan made her first public appearance as the newly-appointed county manager at a grand opening ceremony for the county’s new Department of Human Services building. She was greeted by county employees and members of Arlington’s state legislative delegation, including Del. Patrick Hope and Del. Adam Ebbin.

When she first accepted the interim position, she says she was only interested in testing out the job.

“I wasn’t sure if it was something I wanted to do,” she said. Despite snow storms, a huge budget gap and other challenges during her short tenure, Donnellan says she came to enjoy the position.

“Toward the end of it I actually became interested in it,” she said. By that time, however, the county was concluding a long search for someone to fill the position. Savannah City Manager Michael Brown took the job, and Donnellan returned to her old post as deputy county manager.

On Wednesday, as Brown prepared his resignation letter, Donnellan was asked again if she wanted the job. She said yes.

“I’ve always had lots of opportunities to do some significant stuff, and this will allow me to continue carrying out the policies of the board, working with the workforce [to address] their needs, and giving the community the best that they can get from the government,” she said.

“This will probably be my 28th budget in the county,” she said. “Finance is what I know. It is going to be a challenge. I think the community worked with me well last year in trying to sort through some of the issues around balancing the budget.”

“I think we’re very, very fortunate to have someone of the caliber of Barbara Donnellan here,” he said. “We could not be in better hands. Barbara is the kind of person who when we have an impossible job, she’s the one who always gets it done. I think there’s a very high degree of confidence in the person who now has the reins.”