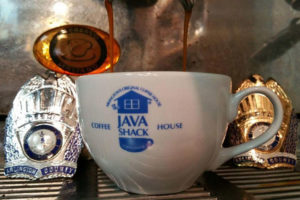 The Arlington County Police Department wants to grab a cup of joe with you.

Next Thursday, March 19, members of the ACPD’s Second District team will be serving as baristas at Java Shack from 4:00 to 6:00 p.m. The ACPD has pre-paid for $100 worth of drip coffee to give out to customers, and officers will be serving it as well as making themselves available to the community.

ACPD’s Second District covers from Ballston to Rosslyn, Crystal City and Pentagon City and the residential neighborhoods closeby. Capt. Kamran Afzal is the commander of the second unit, and he said the event is a way to talk to the community “with no agenda.”

“We’re just trying to engage the people that we serve over a cup of coffee,” Afzal told ARLnow.com over the phone today. “Anything goes, whatever people want to discuss, we’ll discuss, and maybe humanize each other.”

The First District unit of ACPD hosted a similar event at Metro 29 Diner in January, Afzal said. The Java Shack, under new management since January, will look to do more community-oriented events like ‘Coffee With a Cop’ in the future.

“‘Coffee With a Cop’ is a great example of the types of community events that have defined Java Shack’s growth over the years,” Java Shack manager Robert Peck said in a press release. “We are honored to host the Second District Team and look forward to giving our baristas a break while the police run the counter.”