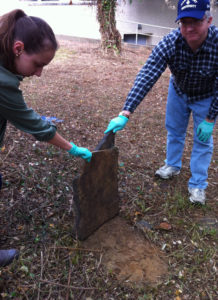 In the northeast corner of Marymount University’s North Arlington campus, there has stood an old cemetery with gravestones covered in weeds, without so much as a clue as to who was buried there, and when.

Many of the gravestones read “Gone but not forgotten.”

“That was pretty ironic because the people there had been pretty much forgotten,” MU nursing student Jen Carter, one of the students who was worked to uncover the mysteries of the old cemetery, said in a school press release.

This year, history professor Patrick Mullins, at the urging of MU President Matthew Shank, has led a group of students in unearthing the history behind the cemetery, and they’ve gotten results. According to the school, the Birch-Campbell Cemetery is the burial place for dozens of Arlington residents, dating back to 1841. The most recent burial was in 1959, nine years after the school was founded. 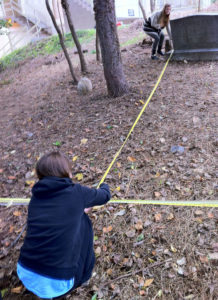 “Turns out it’s always been something of a campus enigma,” Mullins said. “No one was really sure who was there, why it was there or who even owned the land.”

Mullins said they’re still not sure who owns the land — the discovery project is ongoing — but they do know more about some of the cemetery’s permanent residents. Most, the school said, were middle-class farmers and landowners.

The fathers, sister, uncle and brother-in-law of Mary Ann Hall, who owned an “upscale brothel” near the U.S. Capitol, are all buried in the cemetery, the students found. Hall owned a farmhouse on the land where Marymount’s Main Hall now stands. She is buried in Congressional Cemetery after her death in 1886.

“Some of the big questions we discussed — and we need to ask as a society — is who do we remember and what do we preserve?” Mullins said in the release. “We learned a great deal about the site and how it ties into local and regional history. We didn’t answer all the questions we were trying to answer, but it’s an ongoing project. We’re not even positive who actually owns that plot of land. That’s part of the research that we’d like to complete.”