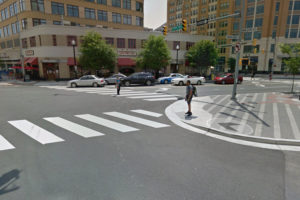 The final, small portion of the project to improve pedestrian safety around the Clarendon Metro Station was approved by the Arlington County Board on Saturday.

The County Board approved an easement at the corner of Wilson Blvd and N. Hudson Street, allowing the county’s Department of Environmental Services to extend the curb at the intersection, improving sight lines for crossing pedestrians and shortening the time they are walking in the street.

“These curb extension go out about six feet from the edge of the sidewalk curb line at the corners of intersections and they shadow the ends of the on-street parking,” DES Program Manager Bill Roberts told ARLnow.com. “Curb extensions have been built along Wilson Boulevard, Clarendon Boulevard and throughout the commercial corridors at most of the marked intersections over the last 10 years … and within the residential neighborhoods at the higher-volume pedestrian crossings.”

This final curb extension — in front of the recently opened Don Tito restaurant — is the culmination of the Clarendon Central Park revitalization that began in 2013. County officials held a ribbon-cutting for the new park in November of that year, but the work on the last pedestrian improvement is expected to take a month this spring.

In addition to making it safer for pedestrians in the heavily foot-trafficked corridor, the extensions will have ADA-compliant ramps.

No on-street parking will be removed as a result of the curb extension, we’re told. Construction is expected to take about a month.