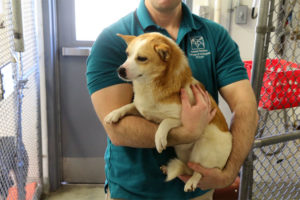 (Updated at 6:00 p.m.) The Animal Welfare League of Arlington is strapped for cash and it says it’s time for the Arlington County Board to honor its responsibility to animals in the area.

“There’s a point at which we have to say ‘you’ve got to step up here’,” AWLA CEO Neil Trent told ARLnow.com today. “If you want to maintain the high level of animal welfare in Arlington, you have to give more.”

Every year, Trent said, the animal shelter — which is the county’s contractor for all animal control services — gives the county a budget for how much it costs to maintain its level of service.

In FY 2016, the difference between AWLA’s budget and the money allocated in County Manager Barbara Donnellan’s proposed budget is $365,000. Donnellan has allocated a total of $1.37 million to AWLA.

“The county has never provided the amount of money we’ve asked for. Never,” Trent said. “Every year, they come back and say ‘this is what it is … this is what you’re going to get.’ It’s never been negotiable.”

For the first time, AWLA is asking for help to pressure the County Board for money. Yesterday, the shelter sent an email to supporters asking them to contact Board members by March 24, and “tell them that as voters and taxpayers, YOU WANT public health and animal welfare to be a budget priority and ASK the County to provide AWLA with an additional $365K to continue to keep pets and the community safe.”

AWLA employs four animal control officers who work in shifts to have coverage 24 hours a day, every day of the year. Trent says he did an analysis, and the Animal Welfare League of Alexandria covers less area, a smaller population and employs five officers, all of whom are better paid than their Arlington counterparts.

On Sunday, the one control officer on duty fielded five calls from 11:20 a.m. to 4:40 p.m., including a German shepherd running in traffic that the Arlington County Police Department had to use a Taser on to subdue. Another dog had to be given shelter after its owner attempted suicide. It was busier than a typical day, Trent said, but not by much. Earlier this year, AWLA officers spent 70 hours investigating poisoned sausages that were left around north Arlington.

The lack of animal control resources in a county of 220,000 residents sometimes takes a toll. Arlington police officers have at times had to wait upwards of an hour for an animal control officer to finish up one call and respond to the animal-related police call they’re on.

In AWLA’s contract with the county, according to Trent, the shelter is required to care for injured wildlife; quarantine sick animals; take in animals whose owners have been injured or whose houses have suffered a disaster; rescue animals from abuse or neglect; and investigate public health concerns.

Also in the contract, Trent said, is a County Board-set goal of saving 90 percent of the dogs and 85 percent of cats taken in, despite the national shelter average save rate of 60 percent.

Last year, Trent said AWLA signed a 10-year extension of its animal control contract with the county, but every year the contract comes up for review. Last year, the county upped its contribution to the shelter by 1 percent, but the three years before that, the rate was flat. Meanwhile, AWLA’s costs rise about $60,000-$90,000 a year, Trent said.

“Name an award, we’ve received it,” he said. “It seems to me that we probably shot ourselves in the foot because we continue to maintain such a high standard of care that the county says ‘they’ll get on with it.'”

Trent said if AWLA doesn’t receive any additional funding, the board of directors will have to discuss which services it can scale back. He said, as CEO, the welfare of the animals in the county “is my responsibility, and I’m really concerned about the level of service. It’s not the County Board that’s going to be affected, it’s some kid that’s bitten or scratched by a rabid animal.”

And while he understands the County Board has plenty of items to fund, Trent is saying “enough is enough.”

“It would be a smack in the face from the county if they didn’t acknowledge our need,” Trent said. “You’ve only got to get one rabid raccoon in the middle of Arlington and you’ll see who’s needed most.”