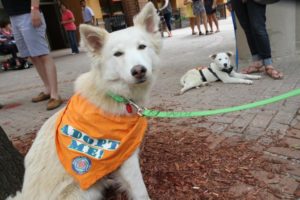 The pet adoption day is scheduled to be the only D.C. area stop this year for the North Shore Animal League “Tour of Life” bus. New York-based North Shore bills itself as the world’s largest no-kill animal rescue and adoption organization. Beyond that, it’s perhaps best known nationally as the animal shelter publicly supported by Beth Stern and her husband, Sirius XM host and America’s Got Talent judge Howard Stern.

“The Tour of Life bus… will park on the Community Loop and house approximately 50 animals ready for adoption,” according to a Market Common spokeswoman. “The Loop will be transformed into an interactive dog park, where Arlington residents will have the opportunity to bring their pets to mingle with other animals, as well as have the opportunity to adopt from and donate to Homeward Trails.”

Ten percent of the proceeds from the Yappy Hour will be donated to Homeward Trails.