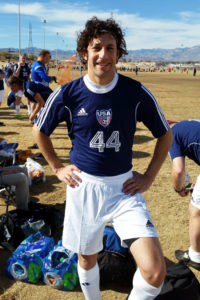 Unlike many of the athletes sports fans typically associate with the honor — in their 20s, playing in the Olympics, already recognized worldwide for their prowess — Hoffer had to wait decades longer to don the red, white and blue. Hoffer is 45 years old and will play soccer in his first international tournament, the Maccabi Pan Am Games in Santiago, Chile.

Hoffer has played soccer since he was 3 years old, but didn’t even qualify for the varsity team at his high school in Michigan. At the time, he was 5-foot-7 and “120 pounds soaking wet.” But he continued to play, and “grew into [his] body.” As his peers gave up the sport, Hoffer only improved.

“My game is all about speed and endurance, but I’m generally faster than most, so wherever they need a burst of energy, I come in,” Hoffer told ARLnow.com. He sees himself as a slower, Jewish version of DeAndre Yedlin, the young speedster from the U.S. Men’s National Team.

Hoffer was named to the U.S. Maccabi Masters team, which is restricted to players 45 and over of Jewish heritage. Hoffer’s grandfather was a professional soccer player in Israel, and he’s keeping the sport in the family — he coaches his daughter’s second-grade team in the Arlington Soccer Association.

“For many Jews, we don’t have a lot of sports heroes to look up to,” Hoffer said. “Providing examples like this to be able to show my daughter and other kids in the community that you can be Jewish and an athlete and meet Jewish athletes from around the world is a pretty powerful thing to provide.”

The Maccabi Pan Am Games draw Jewish competitors from all over the Western Hemisphere, and the U.S. squad will have to compete against world soccer powers like Brazil and Argentina. But it is not the Olympics — athletes must help pay their own way. Hoffer and his teammates each have to raise $6,600 to be allowed to participate.

Hoffer has set up an online fundraising page, where he has raised $4,194 so far. If he raises the money, he’ll have a chance to compete with many of the players that led the 2013 U.S. Masters team to the bronze medal in the world wide Maccabiah Games in Israel.