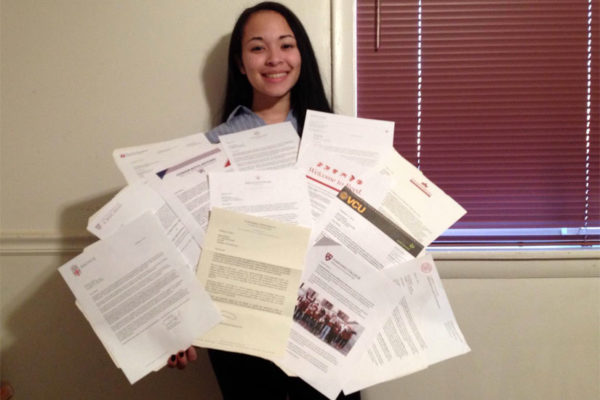 Brandi Moore is far from your typical high school student.

Most days, she goes to bed at midnight or later to study or finish. Some days, she wakes up at 5:00 a.m. to get in a few extra hours of studying before attending classes at Washington-Lee High School. In the evenings or on weekends, you can find her performing in one of a handful of theater groups — at school or otherwise — or volunteering to clean up streams and mark sewer grates.

High-achieving students, especially in Arlington, are hardly news. But what makes Brandi stand out, her father George tells ARLnow.com, is her own self-possessed drive.

“I never had to push her to read or anything,” he said. “I used to have to tell her to stop reading and go to bed. I’ve never even had to look at her grades online. She just naturally absorbs stuff and wants to learn.”

Brandi’s hard work has paid off. This week, she received acceptance letters from all five Ivy League universities she applied to: Cornell, Brown, the University of Pennsylvania, Columbia and Harvard. Those letters came after she had already been accepted at eight other schools, making her 13-for-13 in college applications.

A month before her flood of Ivy League acceptance letters, Brandi said she received “likely” letters from four of the schools, something she said the Ivy League universities only send to a few hundred students.

“They helped the process a lot. I knew my fate would be decided, because I was already pretty sure I was getting in,” she said.

Before she got those “likely” letters, it was a different story. Her first letter and package was from Brown University in Providence, R.I., which had been her dream school since she was 8 years old.

“When we got a pretty sizeable package from Brown, we didn’t know what it was,” she said, referring to the piece of mail that came. After she opened it, “I lost it. I was really excited.”

The Moores live in the Columbia Heights neighborhood, and Brandi has risen through the ranks of Arlington Public Schools, from Campbell Elementary School, to Kenmore Middle and now Washington-Lee. The 18-year-old senior has narrowed down her choices to Brown and the Ivy League school that gave her the biggest financial package: Harvard. The family will be traveling to Cambridge, Mass., tomorrow to visit the oldest university in the United States.

“Harvard is really, really pushing her,” George Moore said. He added that the whole process has been “so strange,” because, after all, what parent expects Ivy League schools to fight over any student? Reed College in Oregon paid for her to fly across the country to visit the campus. “I knew something was going on when they flew her out there and paid for everything. I thought ‘something special’s going on here.’ It just sort of comes one after another. It’s hard to keep up.”

Brandi said she hopes to make her decision in the next week. Next year, she hopes to start studying biology or something in the life sciences, while keeping up with theater, her passion. Brown appeals to her because the school doesn’t have a core curriculum; students can take whatever classes they want. On the other hand, Harvard is Harvard.

“Our classes in high school, there are kids who love what’s going on in the classroom, there are kids who don’t love it as much,” she said. “I’m excited about being in the class where everyone loves learning. I’m just generally excited to see what my limits are and what I’m really going to end up doing. I really want to find myself.”