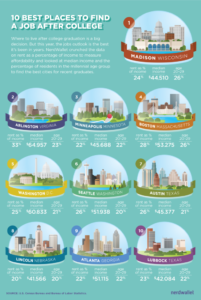 Arlington is the second-best “city” in the country to live in if you’ve just graduated college, according to a recent study.

The financial services site NerdWallet compared the median income, percentage of income spent on rent and percentage of the population between ages 20 and 29 to determine its list. Only Madison, Wisc., was ranked higher than Arlington, with Minneapolis, Minn., Boston and D.C. finishing in the top five.

Among the 100 biggest municipalities in the U.S., Arlington had the second-highest median rent, at $1,761 a month. That cost is outweighed, according to NerdWallet, by Arlington’s $64,957 median income, the third-highest among the cities compared in the study.

“Washington, D.C., and neighboring Arlington, Va., stood out among our top 10 cities with up to 67 percent of the workforce finding jobs in management, business, science or the arts,” the report states. “These fields have the most jobs that require a bachelor’s degree or higher.”

Twenty-three percent of Arlington’s population is between 20 and 29 years old, according to U.S. Census Bureau data, making it more appealing for the recent college graduates in their early 20s. This is no surprise, considering Arlington’s reputation as one of the country’s best places to live in the country for millennials.