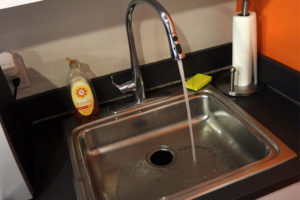 Police are investigating an unusual home burglary in Cherrydale.

The break-in occurred this past weekend, sometime between Friday evening and Saturday morning. Nothing was taken from the home — on the 1600 block of N. Randolph Street — instead, someone positioned the two kitchen sink faucets so they were over the countertop, then turned the water on and fled the scene.

The house was being renovated at the time, according to police. An electrician came to the house Saturday morning and discovered a flooded basement and water pouring in from the ceiling.

It was a scene reminiscent of the “wet bandits” from the movie Home Alone.

“They had quite a bit of water in the basement of the residence,” Arlington County Police spokesman Dustin Sternbeck told ARLnow.com. “It definitely caused significant damage to the home.”

Water damage to the kitchen, basement, laundry room, main bathroom and ceiling has been estimated at $15,000, Sternbeck said.

The investigation into the crime is “ongoing,” according to Sternbeck, but police are looking into the possibility that the perpetrator was a disgruntled employee recently fired from the renovation job.