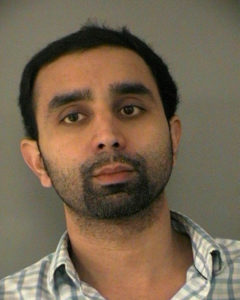 An Arlington man has been arrested and charged with robbing a bank in Ballston this past fall.

Police say 30-year-old Sunny Parekh was arrested without incident at his home on the 1400 block of N. Scott Street, near Courthouse, last night (Wednesday). He’s been charged with the Nov. 10, 2014 robbery of the Presidential Bank on the 900 block of N. Stuart Street.

The FBI and Alexandria police assisted with the investigation and arrest, according to an Arlington County Police Department press release (below).

Parekh is currently being held at the Arlington County Detention Facility, which incidentally is located just three blocks from his home.

“He can probably see it from his cell window,” noted Arlington police spokesman Dustin Sternbeck. “It wasn’t a far drive.”

Parekh is also a suspect in two other bank robberies, in Alexandria and the District. No word yet on whether charges have been filed for either of those robberies.

A bank robbery suspect was taken into custody by the Arlington County Police Department, with assistance from the FBI Washington Field Office and Alexandria Police Department, at his residence in the 1400 block of N. Scott Street. Sunny Parekh, 30, of Arlington, VA, was arrested during the evening of April 8, 2015 and charged with bank robbery. He is being held without bail.

At approximately 3:59 p.m. on November 10, 2014, the Arlington County Emergency Communications Center was alerted of a bank robbery that had just taken place at the Presidential Bank, located in the 900 block of N. Stuart Street. The suspect entered the bank just prior to closing time and handed a teller a note that demanded money and implied he had a weapon. The teller gave the suspect an undisclosed amount of money and the subject fled towards Ballston Metro Center.

After months of police investigation and collaboration with partner law enforcement agencies, Parekh was identified as the primary suspect. Officers took the subject into custody without incident and he is being held at the Arlington County Detention Facility. “The closing of this case by our investigators was the direct result of outstanding work by our patrol officers and the leveraging of the resources of our FBI and Alexandria colleagues with whom we work closely on a daily basis,” commented Daniel J. Murray, Deputy Chief of the Criminal Investigations Division.