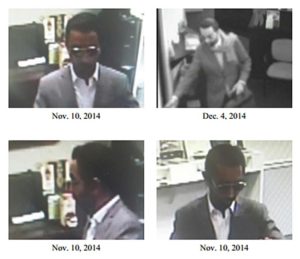 (Updated at 6:10 p.m.) The FBI is looking for a man accused of robbing banks in Arlington and the District over the past month.

The man robbed the Presidential Bank at 901 N. Stuart Street around 4:00 p.m. on Monday, Nov. 10, according to investigators.

“The subject entered the bank through a set of doors closest to the Ballston Metro station, approached a bank teller and passed a note that demanded money,” the FBI said. “The subject exited the bank with an undisclosed amount of money.”

Most recently, around 4:00 p.m. on Thursday, Dec. 4, the man is accused of robbing the Premier Bank at 1604 17th Street NW in D.C. He allegedly passed a note to a teller and fled after receiving cash.

Investigators say the suspect is about 30 years old, Middle Eastern and between 6’0″ and 6’5″.

“The suspect is described as having short black hair, unshaven, wearing a grey or brown suit, a white button-down shirt without a tie and sunglasses,” according to the FBI. “During the Dec. 4 robbery in Washington, D.C., the subject was wearing a scarf around his neck. During the Nov. 10 robbery in Arlington, the subject was described as carrying a black leather briefcase or laptop bag.”

The FBI is offering up to a $5,000 reward for information that leads to the identification, arrest and conviction of the robber. Anyone with information on the crime is encouraged to call the FBI at 202-278-2000 or the Arlington County Crime Solvers tip line at 1-866-411-TIPS (8477).