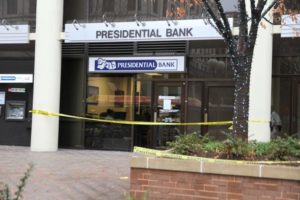 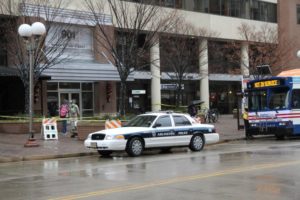 (Updated at 1:05 p.m.) A bank robbery has been reported in Ballston.

Initial reports suggest a man with a gun held up the Presidential Bank at 901 N. Stuart Street. The bank is less than a block from the Ballston Metro station and a block and a half from Ballston Common Mall.

Police are now looking for the suspect, who fled the bank after the robbery. Per normal police procedure, Arlington County detectives are on the scene and the FBI has been notified.

This is the second reported bank robbery at this particular branch this year. The bank was also robbed in July.