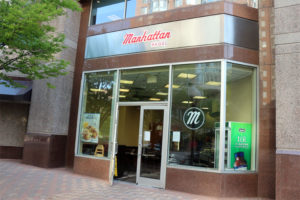 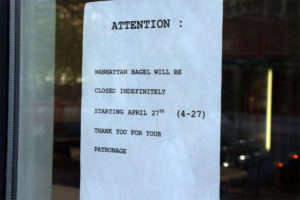 Manhattan Bagel, which has served bagels, coffee and sandwiches to Ballston for more than a decade, will close its doors after this weekend.

The small shop at 4201 Wilson Blvd remained a bustle of activity this morning, when the family who owns the franchise told ARLnow.com that they had “lost the lease” and were closing for good.

According to emails from customers, the bagel shop’s business has continued to thrive despite Dunkin Donuts opening up in the same building, two storefronts over, last summer.

The shop’s last day will be Sunday, April 26. The closest Manhattan Bagel franchise is in Vienna.