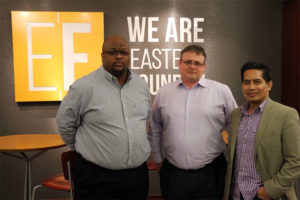 Christopher Worden had wanted to be a member of the U.S. Marine Corps since he was 4 years old.

Five years into his service, during a training run, he twisted his ankle and his foot jammed into train tracks. Worden stubbornly — he was a Marine, after all — kept running and training on the injury, while his leg became more and more damaged. His bone plate grew in the wrong direction, and overcompensating for the injury caused him to blow out his knee and two discs in his back.

By the late 1990s, he was medically discharged from the Marines after having served Presidents George H.W. Bush and Bill Clinton at the White House. Almost two decades later, Worden now finds himself more connected to the Department of Defense than he has been since wearing his dress blues.

Worden is the owner of Worden Technology Solutions, a government contractor that specializes in streamlining information technology services, cybersecurity and professional services. WTS has found a niche, Worden said, in the way it completes its tasks.

“We use technology as a tool to accomplish missions, not as a solution,” Worden says. “I do a lot of homework, try to identify where [the client’s] pitfalls and problems have been. I say ‘here’s what the problems are and here’s what we can fix.'”

It’s simple, unoriginal concept, but it has resonated with multiple DoD clients, and has continued to win Worden contracts. Considering WTS is a service-disabled, veteran-owned small business, he’s in a strong position for government contracts that are legally mandated to involve “set-aside companies” like his. 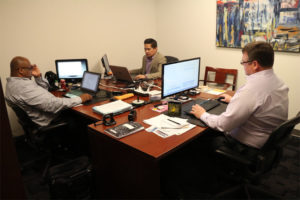 Worden got his first contract in 2009 as a one-man business with the Navy. In 2011, he was able to officially incorporate and launch his company, hire employees and work for more contracts. That includes winning an 18-month-long slog for a Navy Space and Warfare Systems Command contract.

“That kind of process is enough to make a lot of people go ‘I’m done,'” Worden said. “But that’s why I was able to win, because I was too stubborn to quit. I would not give up.”

Worden’s success has led to other agencies inquiring into his company’s services. WTS has been a subcontractor for huge businesses like Northrop Grumman, trying to meet their set-aside requirements. And the company’s office in Crystal City’s Eastern Foundry incubator has helped with all of it.

“With 40 companies here, you can hit all the set-asides,” Worden said. “Plus the location is absolutely the best, plus you have the potential to meet other companies. As a small business, you tend to work on your own and you become bitter. This is about taking advantage of something that’s in front of you.”

Still, there’s one client Worden hasn’t worked for yet, one he’s had on his mind since he was 4 years old. The same one he said he used to chase recruiters when he was 14 he wanted to serve so badly: The Marines. Despite his confidence, the meticulous Worden wants every possible duck in a row before he goes for his dream job a second time around.

“I don’t want to stumble on myself walking into the Marine Corps,” Worden says with a sheepish grin. On the days where his leg injury hurts too much, he has to use a can. Speaking with ARLnow.com last week, he barely walked with any limp at all. “I want to be sharp. But we are getting ready to talk soon.”