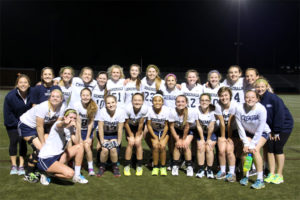 The Generals (5-4) built a commanding lead deep into the first half, going up 13-6, behind the skill and goal-scoring of junior Meghan Fox. Fox had five of her game high eight goals in the first half, with senior Colleen Salazar adding three.

W-L added four goals in the first five minutes of play of the second half.  The two teams then traded goals, but Yorktown was able to mount a strong comeback, tallying seven unanswered goals, tying the game at 18.  After the teams traded goals again, and with under two minutes to go, W-L sophomore Emma Vogel scored what would be the winning goal.

Generals freshman Caroline Laybourn won the next draw control — women’s lacrosse version of a faceoff — giving W-L possession as time was running out. However, the Patriots caused a turnover with under 30 seconds remaining, bringing the ball down to their offensive zone, but Salazar was able to pick up a ground ball and hold possession as the game ended.