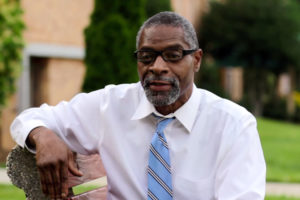 Former Army Cpl. Alvin Hill just renewed his lease on an apartment on 8th Road S. in Arlington, almost a year after he originally moved into his home.

For 20 years before that, Hill, who served in New Mexico, Italy and Nuremburg, Germany, was chronically homeless. He had lived on family’s couches and floors, and when he could no longer do that, he slept on the streets of D.C., in shelters in Alexandria and in 24-hour laundromats along Columbia Pike. There were nights he slept in Reagan National Airport, he said; anywhere with a roof and unlocked doors.

Last June, the Arlington Street People’s Assistance Network, after working with Hill for months getting his finances and documentation in order, found Hill an apartment, secured housing subsidies and provided support to make sure he sustained himself there.

“Housing is the key to ending homelessness,” A-SPAN Executive Director Kathy Sibert told ARLnow.com from her office yesterday. “A lot of the things people take for granted, but just getting up, getting a meal, having clean clothes, maintaining your hygiene, that can take an hour when you’re in a home. When you live on the streets, it could take all day.”

Now, Hill has a place to live and a place to take care of his infant son, who suffers from cerebral palsy and requires round-the-clock attention.

Hill’s plight was far from unique in Arlington and around the country. January’s point-in-time homeless count revealed there are 239 homeless individuals and family in the county, 19 of whom are veterans. According to the National Coalition for Homeless Veterans (NCHV), 12 percent of all homeless people in the U.S. are veterans, about 50,000 total on any given night.

“You come out [of the military] and you’re lost,” Hill said. “In the Army, everyone did everything for you. You didn’t develop skills you need to make your own decisions.”

Homlessness becomes the new normal, he said. Waking up, finding the places that are giving out food, panhandling for money to buy drinks, and finding a safe sleeping spot; all of it becomes a routine that is increasingly difficult to break. 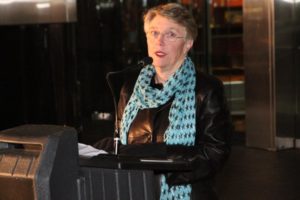 “You can try to change, but for veterans will mental issues, it just takes one incident of something not happening for you, and you go right back into that mode,” he said. Even for homeless people with jobs, finding a place to live is not as easy as it sounds.

To get an apartment, you need valid ID, and proof of income. Hill, who had no need for a car and no place to store files, needed to get a valid ID. For that, he needed a birth certificate, another piece of documentation lost with his home. He needed to apply for a copy of the birth certificate and a copy of his social security cards. All of the ID applications cost money — money he did not have.

That, he said, is how he wound up on the streets for the better part of two decades. Once he relocated himself to Arlington, he immediately found A-SPAN, and the nonprofit immediately got to work finding him a home.

“Veterans don’t broadcast to each other ‘this is where you find the help you need,'” Hill said. “But when I came to Arlington, everyone knew A-SPAN.”

Last year, Arlington completed its successful 100 Homes campaign, housing more than 100 of its chronically homeless. It was part of a nationwide 100,000 homes campaign, which, when it concluded last June, wound up housing 108,000 people. Hill was honored with a ceremony in D.C. — he was the 100,000th person housed in the campaign.

Hill was one of 16 veterans Arlington housed in the campaign, Sibert said. By 2015, the White House has set a goal of effectively eliminating veteran homelessness in the country, and all homelessness by 2016. The initiative, called Zero:2016, is already off to a good start: according to the NCHV, veteran homelessness has been reduced by 70 percent since 2005.

“We’ve made great strides in eliminating homelessness among the veterans in our community, but we are not resting on our laurels,” Arlington Department of Human Services spokesman Kurt Larrick said. “Earlier this year Arlington signed on as part of the national Zero:2016 initiative to house homeless veterans and the chronically homeless. The recently completed 100 Homes Campaign not only got many of our most vulnerable people off the streets or out of shelters and into stable housing, it forged stronger ties across the entire continuum of care and taught us how to tap into important resources to help house vets. We’re taking the lessons learned from 100 Homes and using them to make Zero:2016 a success.”

Despite the fact that Arlington is a veteran-dense county, its veteran homelessness rate is below the national average. Sibert said that’s not necessarily because the Pentagon is a neighbor, instead it’s because everyone in the county recognizes the urgency.

“There are a lot of people here with military backgrounds,” she said. “Arlington as a whole is a caring community, and that extends to our veterans, too.”