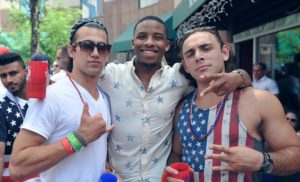 Thrillist included Clarendon in its list of “America’s 12 Bro-iest Neighborhoods,” ranked No. 10.

Bros, defined by Urban Dictionary as “obnoxious partying males,” are supposedly attracted to Clarendon as a temporary place of residence right out of college.

So, you just graduated from Georgetown and got yourself a job where your boss isn’t also the guy sitting across from you at Thanksgiving dinner. Congrats. Now, where do you go to rock your Vineyard Vines, drink craft beer, and live with your college lacrosse teammate? Clarendon, of course, right across the river from DC in Virginia. It’s where all the fresh-outta-school bros show off the extra cash before moving to Manhattan work in finance and be closer to family in Connecticut.

Ranking higher than Arlington on Thrillist’s bro scale are neighborhoods like Murray Hill in New York City (No. 1), Uptown in Dallas (No. 2), Balboa Peninsula in Newport Beach, Calif. (No. 3), Wrigleyville in Chicago (No. 4) and Capitol Hill in Seattle (No. 5).