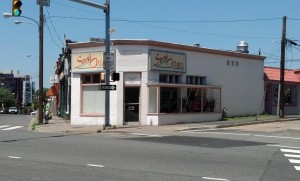 The weekend is here, which for many Arlington residents will mean a trip to Taste of Arlington in Ballston.

The event will take place from noon to 6:00 p.m. on Sunday, on Wilson Blvd, in front of Ballston Common Mall. Several road closures are planned in conjunction with the event.

A number of road closures in the Ballston area are also planned for the Girls on the Run 5K, which will take place Sunday morning, before Taste of Arlington.

If you wanted a taste of Arlington in 2010, the year of our launch, one place to get it was at the idiosyncratic eatery called Sam’s Corner, in Clarendon. This past week was the fifth anniversary of an incident very loyal ARLnow readers may recall.

Here’s how we described it in a comment a year after it happened, in response to readers wanting us to “research” the rarely-open restaurant:

An ARLnow.com writer walked into Sam’s Corner with the intention of doing a totally innocuous profile of what seems like a unique, older local business. For reasons unknown, the owner started asking strange questions of the writer, then rudely kicked the writer out and threatened to sue if anything was written about him or the restaurant. It was bizarre enough that we reported it to the police. Police told us that no crime had been committed. Seeing as how we don’t have the power or desire to “investigate” a private business, that episode and this comment will be the first and last time we devote any sort of time to Sam’s Corner — save the occasional wayfinding reference, as seen in this article.

Breaking our promise, we said goodbye to Sam’s Corner in 2012.

Today, it is with great regret that we are saying goodbye to Ethan Rothstein, our primary ARLnow reporter since July 1, 2013. Ethan will be joining the team at Bisnow, where he will report on commercial real estate and development. The ARLnow team wishes him well.

We plan to introduce our new ARLnow reporter to you just after Memorial Day.

With that, feel free to discuss any local topics of interest in the comment section.