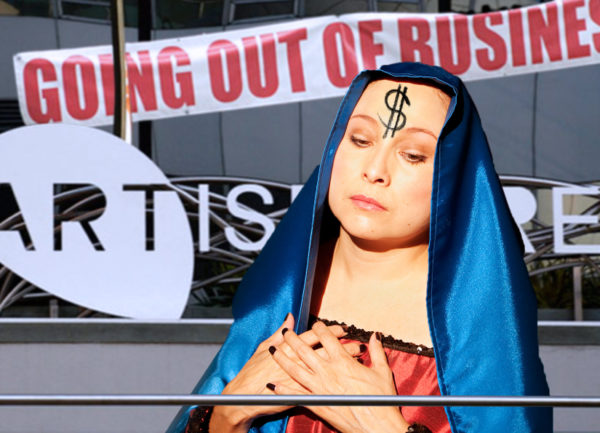 A new art piece will lambast the closure of Artisphere on the venue’s final day of live performance.

Artist Carolina Mayorga can neither confirm nor deny that she will assume the form of the Virgin Mary apparition during a performance titled “Our Lady of the Vanishing Arts.” But Mayorga, who’s dressed as the holy figure before, says there’s a good possibility a divine apparition could materialize at 7 p.m. on Saturday, June 6.

During the performance piece, which lasts an hour and precedes a musical performance by Stooges Brass Band and Black Masala, Mayorga will perform mock holy rituals and anoint Artisphere attendees.

“I have these cardboard letters that spell the word art,” explains Mayorga. “and I’m going to burn them in a little metal tray, mix that with oil, and use a brush to [paint dollar signs on attendees’ foreheads].”

A live organist will play Catholic mass classics such as “Ave Maria” alongside the performance.

The point of the performance, explains Mayorga, isn’t to belittle religion. Instead, it’s to mourn the loss of a local artistic institution.

“I benefitted from Artisphere for a long time,” she says. “I did an artist in residency with them in 2013. They’ve always been supportive of my work.”

Some of the art from Mayorga’s residency still clings to the gallery’s walls as a permanent installation.

“When you want to do a special performance, you need a venue like Artisphere,” Mayorga says. “It really hurts to lose it.”