Editor’s Note: This biweekly column is sponsored by Dominion Wine and Beer (107 Rowell Court, Falls Church). This column is written by Garrett Cruce.

“Furthermore, we wish to emphasize that in the future in all cities, markets and in the country, the only ingredients used for the brewing of beer must be barley, hops and water. Whosoever knowingly disregards or transgresses upon this ordinance, shall be punished by the Court authorities confiscating such barrels of beer, without fail.” — Reinheitsgebot of 1516

The quote above is the famous paragraph from the German purity law that has governed brewing in Germany since 1516. Though it has undergone slight changes over the centuries, there is still an emphasis on consistency. Particularly where lagers are concerned.

The current law is known under the decidedly less interesting name of “Section 9 of the Public Notice concerning the Amendment of the Provisional Beer Law dated July 29, 1993.” In it, lagers are still highly restricted, but ales are now allowed to use other malts, sugars and colorants. Still, it’s not very open to change.

The result, however, of having such restrictions is that the product of German breweries is fantastic. Jever’s pilsener is nearly perfect; Hofbräu’s original lager is crisp and smooth; and, Weihenstephaner’s Hefe Weissbier hits every note.

Whether you choose the crisp and malty lager or the refreshing and mildly bitter pilsner or the spicy hefe weissbier, you’ll have a delicious beverage for a hot summer day. These beers are perfect for drinking by the grill or on a picnic blanket. 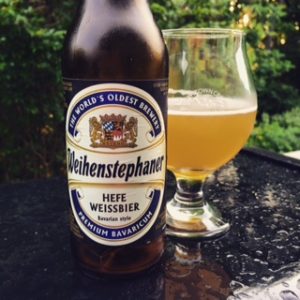 Located in Bavaria, Weihenstephaner claims a lineage that dates back to 1040 CE when it was a Benedictine monastery. Today, it’s the Bavarian State Brewery at Weihenstephan and is well known for this beer. A “hefe weissbier,” also known as a hefeweizen, is a beer that uses a majority of wheat in it’s malt mixture — often 60-70%.

The color is typically a pale yellow and the mouthfeel should be effervescent. The aroma is appropriately of clove from the special yeast strain that has long been known as the “Weihenstephan” strain. Its flavor is cereal up front with a big banana fruitiness in the finish. This beer would pair nicely with grilled shrimp or a big summery salad. Or, just enjoy on its own. 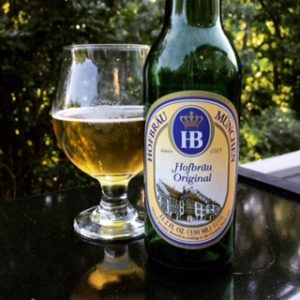 The hofbräuhaus has come to be synonymous with a fine tavern. Originally the name of the taproom for the Hofbräuhaus brewery in Munich, it has since been used in the names of other taverns and breweries. Hofbräu München is a well known brewery that boasts styles that claim to be representative of the German brewing tradition. Original is their light-colored lager.

Though we think of lager as yellow beer, not all lagers are golden. Many are quite dark as the color is dependent on the barley malt that is used. Original happens to be perfectly clear and golden. It’s also crisp with a soda cracker maltiness and a very light hop bitterness. Raise one of these by the grill or with a cheeseburger. 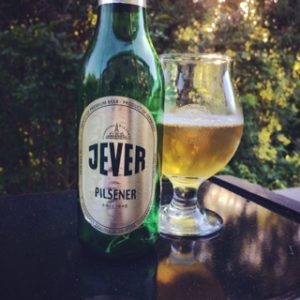 Jever (pronounced Yay-ver) is located in the north of Germany near the Netherlands. They have made this beer for 160 years, perfecting it to the delicious and refreshing beer that they make today. The aroma is very subtle — lightly hoppy and clean. But its the flavor that sets this pilsner apart — it’s clean and sweet up front with a bitter hop finish. You can’t go wrong pairing this with light food or even grilled chicken or steak. The hops add enough flavor to make this pilsner a versatile beer.

All my talk about how these beers are ideal versions of their style certainly does indicate that German breweries have refined their processes to the point of near perfection. And that’s hard to argue with. But, as much as I enjoy them, the thrill of the unknown — and sometimes imperfect — in American craft beer keeps my interest alive. Enjoy these venerable imports, then keep searching to find out what amazing beers you can find. Cheers!