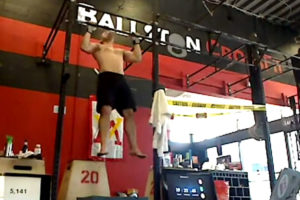 A new world record may have been set in Arlington over the weekend.

A D.C. man claims to have set the world record for most pullups done in a 24 hour period, recording the feat on video at the Ballston Crossfit gym at 1110 N. Glebe Road.

The last official record was 5,101 pullups set by Michael Tufo on May 3 of this year.

“He smashed the record,” Jones said of Bocek.

Bocek started his pullups at the crossfit gym at 6 p.m. on Saturday and finished at 6 p.m. on Sunday. He initially set out two years ago to break the world record, but the number of pullups for the record increased a couple of times, he said.

His original goal was 5,000 pullups but last month the record was broken again, prompting Bocek to raise his goal to 6,000. While he did not reach that goal, he was very happy with 5,801 repetitions.

Three hours from the end of his record attempt, an article surfaced saying another unofficial record of more than 5,700 pullups had been set, so Bocek knew he had to make it past that mark to set the record.

At that point, he was past his physical limit but the support from family, friends and viewers around the world kept him going.

“It was probably the toughest thing I’ve done,” Bocek said.

Via donations, the record attempt raised money for a cause championed by Bocek: the Panama Mission Foundation, a non-profit that builds churches and works to spread the Christian gospel in Panamanian rainforest villages.

The training was more intense than his prior preparation for the 100-mile marathons, Bocek said. His strategy for breaking the record was to do 2,500 pullups in the first seven hours, which he was confident of because of his training, then sets of 500 between 15 minute breaks.

As he neared the end, it got increasingly difficult, and Bocek said there were repetitions that didn’t count because he couldn’t get his chin above the bar.

Although he reported being very sore on Monday, Bocek said would “absolutely” be up for another world record attempt, should anyone break his new record.