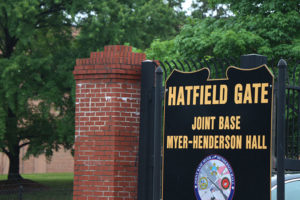 Changes to the access policy at Joint Base Myer-Henderson Hall has some cyclists changing their routes and at least one abandoning bicycling to work altogether.

The new security policy, which started in February, affects cyclists who bike through base, which has been fairly common practice, especially for those along Columbia Pike and Route 50 seeking a safer route to D.C.

Previously, cyclists and other members of the public could enter the base through any of three gates just by going through a security check. Now, only the Hatfield Gate at Washington Blvd and 2nd Street N. remains accessible to non-Department of Defense visitors, and cyclists seeking a round trip route (mostly via the Wright Gate near the Iwo Jima memorial) to have to apply for a special 60-day pass.

The Automated Installation Entry (AIE) pass requires a a criminal records check and pass holders must reapply for it every 60 days in order to access the base.

Arlington County has made encouraging bicycling instead of driving a key transportation priority and has JBMHH routes listed on its bicycle maps. Given the significant inconvenience, however, some are reconsidering.

“At least one person I’ve spoken with is no longer biking into D.C. because the process of constantly renewing an AIE pass is too onerous and he feels the alternative routes are too dangerous or too long,” said Chris Slatt, president of the Penrose Neighborhood Association and a cycling advocate. “With this alternative off the table for non-federal employees, the County needs to make the Pike safe for cycling ASAP.” 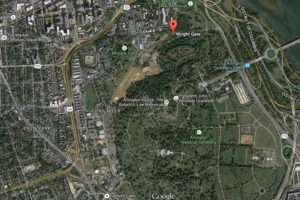 Application for the AIE pass must be delivered in person to the Visitor Control Center (Building 415) at the base and cannot be submitted online. Cyclists can also apply for a sponsored one-year pass, which requires a signature from someone who has a Department of Defense ID.

Lyon Park cyclist Jeff Hopp frequently bikes through the base and uses Wright Gate. When he went to turn his application for a sponsored pass in, there was a sign posted to the door saying the computer system was currently down and applications would not be processed until a new system was installed, he said.

Previously Hopp would only have to show his ID to enter through Wright Gate. Now when he bikes into D.C., he uses the recently-installed Route 50 trail, which he says is poorly marked and maintained.

“The problem with that trail is that there are no marked bike lanes on the side access road you have to ride on before/after you use that new trail… and the trail isn’t maintained at all it seems. There are small limbs, gravel, glass and overgrown vegetation on the edges,” Hopp said in an email.

His new route adds about five to 10 minutes to his total travel time, he said, adding that overall he was more confused than upset with the base access changes. Other Arlington residents say they’re displeased with the base’s new policy.

Gillian Burgess, chairman of the Arlington Bicycle Advisory Committee, said the lack of communication between the base and Arlington residents about the changes is disappointing.

“They very suddenly announced the policy and not in a way that reached many people,” she said.

Hopp found out about the policy when he attempted to ride through Wright Gate and was told he could not pass through, he said. There were no signs on the path before the gate. However, he said the guards at the gate were at least friendly toward him.

The new changes and lack of communication reflect badly on the relationship between the base and Arlington County, Burgess said. When she called to get more information, base employees were unpleasant, she said.

“They didn’t engage with the community at all… They didn’t bother to tell Arlington,” said Burgess.

For some residents, the new changes mean they will have to bike on Columbia Pike, which is in rough shape for bicycling because of heavy traffic and on-going construction, Burgess said. She recommends residents stick to the sidewalk on Columbia Pike and to watch out for rough patches of asphalt.

“The only alternatives now are either awful (biking on the Pike including up the long slow hill to Courthouse Road coming home) or insanely out of the way (through the Country Club which is technically trespassing or all the way down to the Four Mile Run Trail),” he said.

While some residents will get the pass, having to renew it every two months is a hassle other do not want to have. Renewing requires going through the application and vetting process again.

“Some regular commuters are willing to go through the background check / AIE renewal process every 60 days in order to be able to bike through the base,” Slatt said in an email. “People like me who were just using it to do errands in Pentagon City / Crystal City are either driving or doing our errand someplace we can easily and safely bike to.”