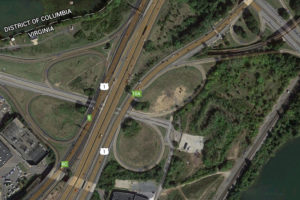 Changes to the Boundary Channel Drive interchange with Interstate 395 and a new bike trail near Long Bridge Park are on the way.

Arlington residents will have a chance to offer feedback on new designs for the Boundary Channel Drive interchange project on Tuesday, June 23 at 6:30 p.m. The meeting will take place at the Aurora Hills Community Center (735 18th Street S.).

The project is primarily intended to improve safety at the interchange, which is located on I-395 between Crystal City and the Pentagon, said David Kirschner, an Arlington County project manager.

“In this area, Interstate 395 is the most congested roadway in our region,” Kirschner said in an email. “The goals of this project are to improve the operations of the interchange at Boundary Channel Drive and improve safety for all road users.”

The project is also seeking to expand pedestrian and cycling access to and from Washington, D.C., Crystal City, the Pentagon and Long Bridge Park through a new bike trail. 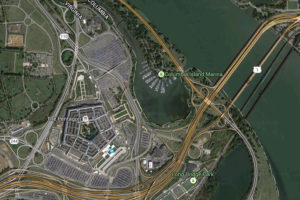 The trail is planned to connect Humpback Bridge to Long Bridge Park but has not been designed yet, Kirschner said. The proposed trail will go from the existing Mount Vernon Trail that connects to the underpass under Humpback Bridge and would extend to Boundary Channel Drive through the interchange that already exists.

“We’re definitely always trying to be more friendly to cyclists and pedestrians,” he said.

The new connection will make it easier to get to and from D.C. and the Pentagon, Kirschner said, adding that pedestrians currently have to do a lot of backtracking — via Crystal City or the LBJ Memorial Grove — to get into D.C.

As the project is still in its planning stages, the new trail has not yet been designed and which department will oversee the maintenance has not been determined. The trail’s planned path falls under multiple jurisdictions, as the National Park Service oversees the Mount Vernon Trail and Long Bridge Park is run by Arlington County.

“The need to keep the trail clean and safe will be an ongoing concern as we move forward in the design and construction of the Boundary Channel Drive interchange,” Kirschner said in an email.

In addition to the proposed bike trail, the project will look at a complete revamp of the interchange between I-395 and Boundary Channel Drive.

“Based on our analysis so far, the current four-lane roadway is overbuilt for current traffic. The traffic analysis we are performing will determine what lanes and ramps are needed for the final interchange in the future analysis year of 2036,” Kirschner said in the email.

The project team is looking at multiple ways to restructure the interchange to make it safer and some ideas include cutting down the amount of ramps or using roundabouts.

“If we can do a roundabout, then we don’t have to have ramps on and off each side,” he said.

The team will ask for resident feedback during the public meeting on June 23, and will incorporate it into the new design.

Once a design is selected, the project moves to the engineering design phase, where structural and utility decisions will be made. Before construction, members of the public will have a chance to weigh in and ask questions. Constructions is scheduled to start in 2018, but there is no completion date as of this moment, Kirschner said.

“For traffic on Boundary Channel, it’ll be a completely different experience,” he said.

Kirschner and his team will monitor the construction on Memorial Bridge and coordinate with National Park Service to make sure timing works for both projects. During construction on the Boundary Channel Drive interchange, the county and partner organizations will work to keep all lanes open, Kirschner said. However, he will know more about possible lane closures once a design is selected.

“We’re hoping to keep the impact to the interstate at a minimal,” he said.