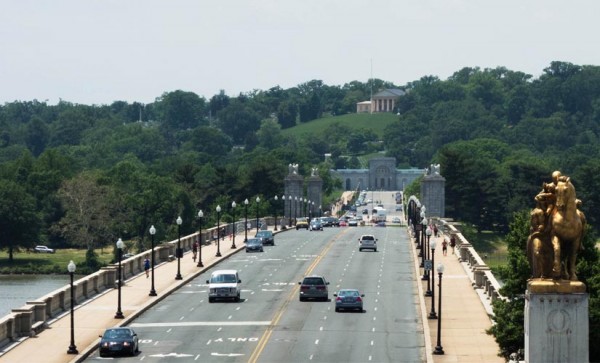 Arlington’s representatives on Capitol Hill are calling for action after additional restrictions were put in place on the structurally deficient Memorial Bridge.

Starting this morning, both outside lanes of the Memorial Bridge were closed to traffic and a 10-ton load limit put in place, closing the bridge to bus traffic. That follows an inspection that found corroding support beams and “significant deterioration” of the bridge’s concrete deck.

The 83-year-old, 2,100-foot-long bridge opened in 1932. It’s on the National Register of Historic Places and — since it connects the Lincoln Memorial with Arlington National Cemetery and Robert E. Lee’s Arlington House — it is considered a national symbol of reunification of the North and the South following the Civil War.

The National Park Service, which oversees the bridge, is planning 6-9 months of emergency repairs starting next month. It says that with the restrictions, the bridge is safe for drivers and pedestrians. The load limit will “help extend the life of the deck for passenger vehicles,” NPS said.

The Park Service is currently seeking $250 million from Congress for permanent repairs and rehabilitation.

“There is nothing more emblematic of Congress’ failure to invest in our nation’s infrastructure than the bridge that brings people into our nation’s capital, a national memorial, falling apart. Memorial Bridge has already been labeled ‘structurally deficient’ and one lane was closed just last week due to safety and infrastructure concerns. Today, we have news that another lane will be shut down.  It’s time for Congress to stop kicking the can down the road and pass a federal transportation bill to rebuild our nation’s infrastructure, starting right here in DC,” said Rep. Beyer.

The National Park Service (NPS) announced today that it will close a second lane of traffic on the bridge, which stretches from Arlington National Cemetery to the Lincoln Memorial and is a major artery across the Potomac.  The rush hour effects of the six-month closures will be dramatic.

“Unlike other infrastructure, NPS roads and bridges like the Arlington Memorial Bridge are 100 percent funded by the federal government, and there are almost no alternative sources of funds for maintenance and improvements other than federal funds. With a cost of up to $250 million to replace the Memorial Bridge, it is no wonder that NPS is unable to do this work when it only receives $15 to $20 million for its transportation projects in the National Capital Region and only $240 for the entire nation. Our region must offer leadership and work with Members of Congress as far away as the western states that are also deeply affected. Beginning with our region, we must create a coalition of Members of the House and Senate determined to begin the uphill climb of rescuing priceless and essential federal assets like the Memorial Bridge that bring millions to the states by providing everything from workplace corridors to tourist sites,” said Del. Norton.

Nearly 68,000 vehicles cross the 83-year-old bridge on a typical work day. The cost to fully repair the bridge is estimated at more than $250 million over several months. Memorial Bridge is just one of more than 70,000 US bridges deemed “structurally deficient.”

“Today’s announcement that we have to close yet another lane of the Memorial Bridge highlights the decrepit state of our infrastructure,” said Senator Kaine. “This additional lane closure will cause unbearable congestion and delays for the approximately 68,000 drivers who use theMemorial Bridge to travel between Virginia and Washington every day. Today’s frustrating news represents a nationwide issue. It’s estimated that there are 4,800 structurally deficient or functionally obsolete bridges in Virginia alone. It’s time to stop kicking the can down the road and address our nation’s crumbling infrastructure by passing a bipartisan, long-term transportation bill.”

“How can Congress fail to act while the Memorial Bridge – which is not only a vital artery for local commuters, but also the entrance to our nation’s capital ­- is literally falling apart? This is not just embarrassing – it’s outrageous,” said Sen. Warner. “We have to get serious about fixing and upgrading our roads, bridges, ports and other infrastructure. Until that happens, Virginia commuters will be stuck sitting in even more traffic – and crumbling and inefficient infrastructure will remain a serious drag on our economic growth.”