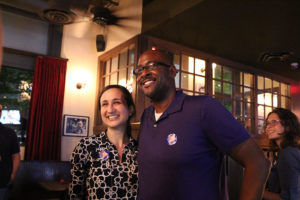 Housing affordability will be the buzz word of the Arlington County Board elections.

Both Katie Cristol and Christian Dorsey, who received the Arlington County Democratic Committee nominations last night after a tight primary race, ran a campaign with it as one of their platforms.

ACDC Chair Kip Malinosky sees their nominations as a sign that housing affordability is becoming the trending topic in the county.

“It [Cristol and Dorsey’s nomination] really means voters were looking for a new generation of leadership,” Malinosky said, adding that school overcrowding and responsive government figure to be two other key pillars of the general election campaign.

Both candidates, who hail from South Arlington, also told ARLnow.com they would make housing affordability one of their top campaign priorities.

Arlington is one of the richest counties in the county, making housing out of reach for some who want to settle in the county. While housing affordability is often associated with subsidized housing and low-economic families, Cristol argues in her platform that it also applies to young families and millennials looking to place roots. 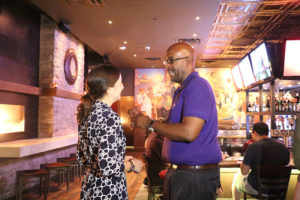 “I’m excited because I think Arlingtonians really, by their votes, I think more people are going to focus on making affordable housing a real priority,” Dorsey said. “Not just for one segment of people but really for all people because they recognize that it’s something that can benefit the whole community.”

But affordability is only one of the issues that Dorsey and Cristol plan to tackle while campaigning, they said.

“We absolutely have to get our commercial sector energized again,” Dorsey said.

In the general election, Dorsey will also be looking to promote filling empty office space, discuss school overcrowding and tackle transportation problems on Columbia Pike. Like Dorsey, Cristol will be campaigning with hopes of fixing transportation problems on Columbia Pike, which is her home. She will also look at livability in Arlington, such as issues with childcare, along wiht issues facing young people, which she said was part of her campaign strategy.

“You know a majority of Arlington County is under the age of 35 and we knew that we weren’t going to win by claiming to be the candidate of the under 35 majority,” she said. “We had to make the case that this growing population of Arlingtonians have a stake here and have something in common with our more established neighbors. And I think that’s what we saw people respond to.”

Local Democratic strategist Ben Tribbett said the primary result — and the recent election of independent County Board member John Vihstadt, driven by crossover Democratic votes — reflects a desire for a change among the Democratic electorate.

“The Arlington voters have clearly differentiated what they’ve been looking for in County Board candidates over the past two years,” Tribbett said. “They’ve been sending a message and I think the message is loud and clear that they want to have a different Board than what they had. I don’t think they wanted radical change… they just wanted to see something different than what was going on, some people who were a little more responsive.”

“Someone like Katie is a great example of that,” Tribbett continued. “She was energetic during the campaign, she went around everywhere. I don’t know how you can send a better message of ‘I’m going to be responsive as your elected official’ than what she did. It’s not by saying it, it’s the action that shows it.”

Tribbett says that precinct-level results from Tuesday night’s primary show that runners up Peter Fallon and Andrew Schneider largely split the vote in North Arlington — “they tended to vote for one and not the other” — whereas Cristol and Dorsey both made a strong showing in much of South Arlington while also picking up votes in North Arlington. 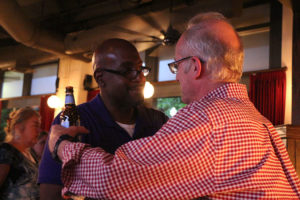 Cristol’s North Arlington support was concentrated in the Orange Line corridor, while Dorsey did well around Virginia Hospital Center and Bluemont.

Should Cristol and Dorsey succeed in the general election, Tribbett said the County Board will be barely recognizable when compared to the body that just a few years ago was consistently voting 5-0 on the vast majority of issues. Vihstadt might even end up being the Board’s swing vote.

“There are no permanent alliances here,” he said. “You’re going to have five scorpions in a bottle. It will be a fascinating thing to watch for sure.”

Democrats, meanwhile, are presenting a united front following the primary.

“Katie Cristol has a passion for engaging a new generation in local government, and Christian Dorsey is committed to revitalizing small businesses, and both are dedicated to excellence in our schools and improving housing affordability,” Malinosky said in a statement. “We are thrilled to have these two outstanding nominees represent our progressive values and Democratic party in Arlington.”

Dorsey and Cristol will run against independents Audrey Clement and Michael McMenamin for the two open County Board seats, which are being vacated by Mary Hynes and Walter Tejada. Election day is Nov. 3.